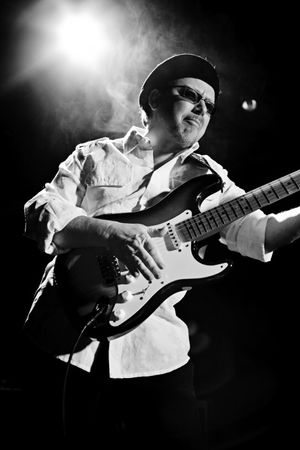 Louis has admired Lloyd Jones for a long time, but had only worked with him occasionally until 2014, when Lloyd's keyboardist (Dover Weinberg) joined the Robert Cray Band.  Since then, Louis and Lloyd have teamed up on a regular basis.

Singer-songwriter-guitarist Lloyd Jones is one of the founding fathers of the NW blues scene.  Along with a handful of other Oregonians of his generation, including the late Paul deLay, Robert Cray, Curtis Salgado, and Bill Rhoades, Lloyd began playing and singing blues when there was no fan base and no existing venues.  He is an authentic bluesman whose musical passion still burns as brightly as ever.  Lloyd counts among his fans Cray, Delbert McClinton, and other blues stars.  Lloyd isn't world-famous like those artists, but he's just as deserving, and his time is sure to arrive eventually.

What Lloyd does, he says, is “combine New Orleans rhythms, the simplicity of Memphis music, and the rawness of the blues, all for the 21st century.  This music is not about louder and faster.  It’s about time, meter, groove. I thought Muddy and Walter and those guys were pushing the envelope in their era.  They were using effects, they were inventing their own sound.  They were modern.  I want to look at it in a contemporary way.”