Louis "King Louie" Pain, dubbed “Portland’s boss of the B-3” by The Oregonian, is a musician’s musician. When called upon, Louis is a dynamic soloist, but he specializes in the subtle art of making the musicians and vocalists he works with sound their best.  For him, the song’s the thing, not showing off.  That’s why he’s always in demand with his peers, and why he is an Oregon Music Hall of Fame inductee.

With Steele, Louis performed at Italy's prestigious Porretta Soul Festival in 2017 and at Colombia's Cali Blues & Folk Festival in 2018.  At the latter event, the pair performed and participated in educational activities in five different cities over eight days.  In 2019, the King Louie Organ Trio (featuring Louis, Renato Caranto, and Edwin Coleman III performing their original instrumentals) played nightclub & festival sets in support of their critically acclaimed debut CD, “It's About Time."  Since 2019, Louis & Renato (King Louie & Renato Caranto) have toured Hawaii annually in the fall, performing on Oahu, Maui, and the Big Island.

Louis performed approximately 1,500 times at Portland's premier music nightclub, Jimmy Mak's, during that storied venue's 20-year run, including approximately 1,000 appearances on Thursday nights as the glue of the Mel Brown B-3 Organ Group.  From 2017 until the present (with a 2-year pause during the pandemic), that band has continued its Thursday night tradition at Portland's Jack London Revue.  Louis has also performed innumerable times at the Safeway Waterfront Blues Festival over the decades.

In the recording studio, Louis has played on as well as produced or co-produced numerous CDs, including several released on his own "Shoug Records" label.  The three most recent Shoug releases—featuring King Louie & LaRhonda Steele, King Louie’s Blues Revue, and the King Louie Organ Trio—received 4-star rave reviews from prestigious Downbeat Magazine and were honored in Downbeat's annual "Best Albums of the Year" issue.

In addition to performing, Louis rents out the best Hammond organs in the Northwest (Pain Organ Rental Service), teaches music, and hangs out at his Washougal, WA home with his wife/manager Tracy Turner-Pain and their remarkably friendly cats. 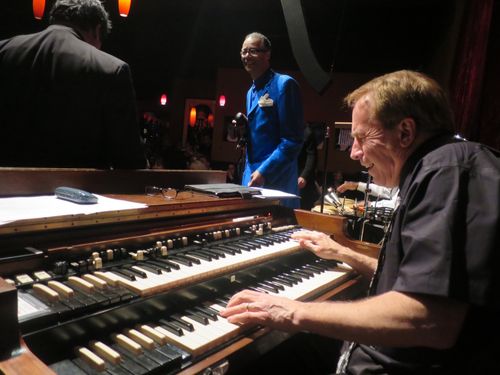